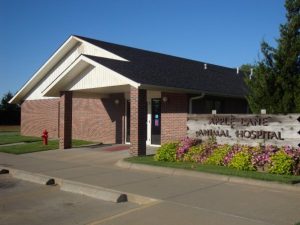 In 1972, Dr. Gerald Schrater was six years out of veterinary school. He’d been working at a horse practice in Saint Louis, Missouri, but he and his wife Judy were certain about one thing- they didn’t want to raise their children in the city. So they left Missouri for Hutchinson.

Dr. Schrater started a practice across the highway from Apple Lane Animal Hospital’s present location, and worked there for some time.

For his next venue, he set up shop in South Hutchinson under the name of Mitchell Veterinary Hospital. The business ran successfully for ten years.

At that point Dr. Schrater decided to better serve his clients, he would make the move back to the area where he had located his first practice, buying a house (and the adjacent land) at 2911 Apple Lane and converting it into an animal hospital. This house would serve as the veterinary hospital until the goal of building a dedicated animal hospital facility would be achieved.

Building on the current structure was initiated in the fall of 1992. In June of 1993, Dr. Schrater moved the practice for the last time, christening the new Apple Lane Animal Hospital at 2909 Apple Lane.

This feature is temporarilly unavailable.
Font Resize
Contrast
Call Us Text Us